US FDA Has Banned Powdered Medical Gloves on January 18, 2017!

On December 19, 2016, the FDA published a final rule banning powdered gloves based on the unreasonable and substantial risk of illness or injury to individuals exposed to the powdered gloves. And the rule is effective on January 18, 2017 for sure.

Medical gloves play a significant role in the protection of both patients and health care personnel in the United States. Health care personnel rely on medical gloves as barriers against transmission of infectious diseases and contaminants when conducting surgery, as well as when conducting more limited interactions with patients. Various types of powder have been used to lubricate gloves so that wearers could don the gloves more easily. However, the use of powder on medical gloves presents numerous risks to patients and health care workers.

The risks to both patients and health care providers when internal body tissue is exposed to the powder include severe airway inflammation and hypersensitivity reactions. Powder particles may also trigger the body's immune response, causing tissue to form around the particles (granulomas) or scar tissue formation (adhesions) which can lead to surgical complications.From a long-term point of view, it clearly presents the powder may cost more time and budget due to severe allergic reactions.

Japan, the country with the advanced medical technology in Asia, has also claimed that they would follow FDA rules and no longer supply powdered medical gloves within two years. Many studies have even indicated that powder-free gloves are going to be a trend!

What are you hesitating for?

Mocare Health’s SurPureTM surgical gloves series is now a great alternative for you to this transition.

‍‍http://tinyurl.com/hqerwq9‍‍ (The Food and Drug Administration)

http://tinyurl.com/j6s32p4 (The Food and Drug Administration) 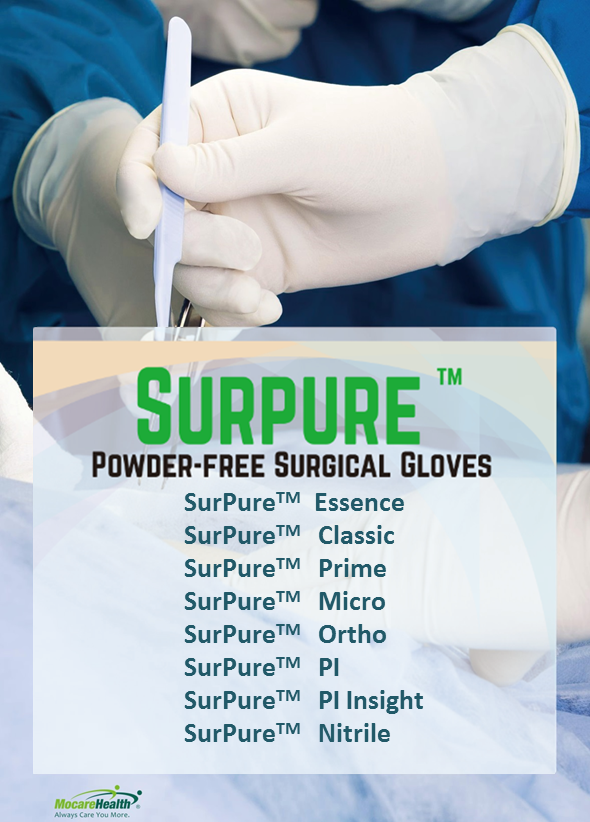